As the title of this book review will suggest, I didn’t really get on well with this book. 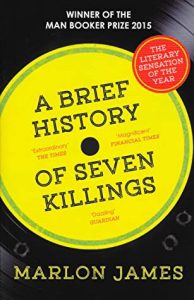 The story progresses following different characters’ tales through several timelines, essentially aimed at following something of the political history of Jamaica from the mid 70s to the early 90s. However, it was clear that this was deliberately intended to be more about the stories of these people, not about the politics or the history, any more than those elements acted as background and setting. The characters ranged from utterly insignificant ghetto boys whose gang lives meant they died young, through CIA operatives, a Cuban terrorist, and an American journalist to the top dog in one of the major Jamaican drug gangs.

The blurb opens with:

And that hook, which is clearly aimed at grabbing unknowing readers to buy the book, has very, very little to do with the story in this novel. Which is no direct problem, but is pretty disingenuous.

Now, I was conscious in disliking this book from early on, right through to its conclusion, that being a white, middle-class Englishman could be a cause of that dislike. I’ve done my best to be objective, but, of course, it is impossible to completely divorce oneself from one’s own background. And, as an author, I’m aware that actually that subjective range is something to be cherished anyway. Not every book can be for every reader. I’m not Jamaican, and not really interested in Jamaica, but I’m pretty sure that actually this is not the main reason I just couldn’t get into this book.

The characters’ voices are well presented, so there is a clear and distinct notion of where each one sits in the spectrum of human lives. And their little individual scenes are clear and interesting snapshots of Jamaican lives. So that was good. However, none of the characters were drawn for long enough that I really got a sense of who they were or how they fitted into the overall story. Indeed, I was mostly at a loss to work out what the overall narrative actually was.

In his acknowledgements at the end of the book, the author really sums up the problems I had with this story. He writes:

The problem I had was that I couldn’t tell whose story it was. Draft after draft, page after page, character after character, and still no through line, no narrative spine, nothing….

…Half-formed and fully formed characters, scenes out of place, hundreds of pages that needed sequence and purpose.

And James never goes on to claim that any of those problems have been sorted out. I agree – they haven’t.