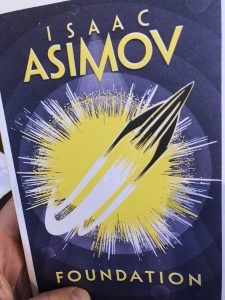 I read Asimov’s Foundation as a boy (maybe 12 years old). It set me solidly on the path of science for life. But it occurred to me recently that I hadn’t read it for 40 years. So I bought the entire series of six increasingly fat paperbacks, and I’ve just finished the first one.

Well, it’s not what I remember! At least the fundamental prediction of big data being able to both predict and manipulate societies is exactly as I remember it. The rest though is not what I had in my head about it at all. It’s really a series of short stories of politicking set against a galaxy-sized collection of nations, or kingdoms, worlds. There’s a bit of sci-fi tech stuff, and spaceships, but it is all about diplomacy and the way politics works. The machinations of governments and leaders, and the manipulations of the people is the main essence of it all. 12-year old me doesn’t remember it being about that at all!

The background setting is of a pre-destined history of the galaxy, predicted by the psychohistorian (we’d say big data statistician) Hari Seldon. He has apparently predicted the full course of events for the galaxy for 1000 years. Not individuals and events, but the basic thrust of the rise and fall of states, religions, economies and industries. Now that is the philosophically intriguing premise that I absolutely took to heart all my life. It’s essentially the question of free-will versus determinism. Newton’s clockwork universe or an existence predicated on quantum probabilities. Or both together. Gigantic numbers allow the quantum probabilities to be amalgamated into fixed laws of physics. Hari Seldon did the same with gigantic numbers of people to predict what societies would do in the future. It’s intriguing.

Probably without realising the subconscious influence of this story, I wrote about some very similar ideas in 2089. How could we, should we, would we reconstruct society from the ashes of a fallen, previously stable one? I wonder how my story will hold up in 60 years time as we get closer to when it is set. Foundation very much loses some of its potency in the anachronisms it espouses. It is supposedly set very far in the future, but everyone really likes a cigar! Asimov hasn’t got the best of reputations as a person, and another anachronism is the lack of female characters. I only remember one female character – if there’s more than that, they’re clearly so peripheral that they didn’t register in my memory. This lets the story down quite a lot.

Generally good, but a bit dated. And sufficiently old that it’s cheap enough to have a punt. Although it was bizarre to see the huge number of typos in such an established old book.

I’ll be intrigued to see how the stories develop in the next thousand pages or so of the five remaining books in the series.