Review of Blindness by Jose Saramago

This story starts out really well, with the basic premise of the whole population going blind over a period of a few days, or possibly weeks – the blindness seems to spread like a contagion. And it was also an interesting counterpoint to have one woman immune, although it was probably the only way to easily tell the story. From her point of view we follow the adventures of a ragtag band of the newly blind.
The government response of internment was well played out and allowed development of a few characters in a classic disaster movie way. It also offered some treatment of the day to day issues of blind people, which I assumed was the point of the whole book, although no actual thesis was clear.
Unfortunately, there was a real over focus on scatological problems. I’m sure toilet needs and sewage problems would be an important issue if everybody suddenly went blind but it was too heavily covered, especially when there was no plot drive from it. Had this then caused a surge in illness for example, it might have been more reasonable/relevant. 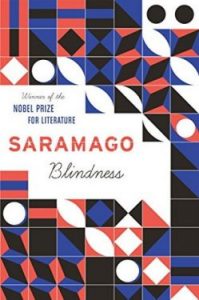 The other thing that annoyed me was the near constant referencing of idioms and proverbs. This was a nice element initially, especially where those about sight reflected the story, but it got pretty boring after the 50th one. The headline for my review here is a nod to this. I don’t know if Saramago’s editor ever complained about proverbs being overdone, but he clearly would not see.
I found the ending unsatisfying, even dull. This is where the fact that there was no actual thesis came to the fore. But no spoilers, so you’ll have to find out for yourself why this was the case!