In the first few editions of this blog, I’ve painted a pretty bleak picture of the difficulties facing people in the world today. So the natural next question would be: “OK, so what do we do about it all?”

How do I think we should live? And why? The main issue is defining ‘good living’. In order to plan a new ‘better’ society, we need to determine what we want out of life: longevity? good health? mental well being? plenty of food? diversity of food? shelter? lack of fear? strong family ties? productivity? creativity? equality for all? lack of violence?

In general, a compromise of all good things is likely necessary: longevity puts pressure on food availability. Unavoidable mental health issues may lead to a necessity for violence to protect the rest of the community. Factors that compete have to be moderated in order that each one falls within acceptable limits.

What is the optimum balance, then, between these various factors? It seems to me that the happiest societies have small populations, in which everyone is  enthusiastic about supporting everyone in the population, and also feels socially responsible for everyone else. Thus, positive endeavours, like Japanese children cleaning their own schools, are enthusiastically supported by everyone, including those involved. In an oversized population, the social separation removes that personal responsibility and engenders an attitude of looking after number one.

How big is the perfect population? As suggested by the long list of factors above, it is of course variable, as a number of things come into play when combing them together. Japan (pop ~130 million) has social order, but are people happy? Iceland (~250k people) is wealthy, but are people happy? 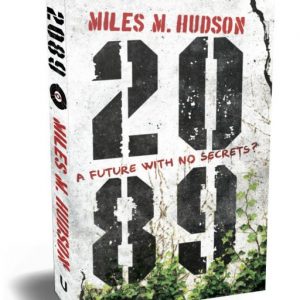 In my novel 2089, the new global constitution limits influence to no more than 10 000 people. Hence no town can be larger than this. Click on the picture of the book to find out how these small communities have developed, are the people happy?

Historically, most communities were small and feudal – a tribe or clan, with leaders/elders who by dint of community tradition had the most stuff and were in charge. However, with a small – and generally inter-related – clan sized group, it was easy to keep the wealth and power of the chiefs in check. Within any population there will naturally be a sort of pyramidal structure within a society. I suggest it’s part of being human. However, keeping the overall size of the pyramid within relatively small limits means the distance between the point and the base, essentially the inequality between rich and poor, is kept at a reasonable difference. With the opportunity to meet everyone in your community comes the ability to sense your duty of care towards your fellow citizens (or villagizens?!)

Moreover, if the ambitions of the community as a whole are restrained, then members can generally ignore the bosses and spend time growing food for their family. Or at least, are not under pressure to spend a lot of their time producing things that do not benefit their own family. Whilst I don’t believe in any of the religion of the Jehovah’s Witnesses, their philosophy of the two things we need to be happy seem to me to have really nailed it: fulfilling work, and a rich family life (with the word rich having nothing to do with material wealth here).

Limiting the size of a population, and allowing/forcing people to use their time to grow food for their family, restricts innovation as research is left to those wealthy enough to have the time and inclination. Further, the extremes of the normal curve are less often reached with a small population, which limits the brain pool. Also, the sort of tribe-sized traditional/feudal set-up I am suggesting is unashamedly unequal, perhaps exploitative. But it is also well ordered – the improved well-being of the members of the community is likely to enhance creativity as there is better mutual support for it. As I described earlier, there is a need to compromise amongst contradictory factors.

As I mentioned above, in 2089, the Covenants of Jerusalem restrict the size of a community to 10 000 people. I think that for real happiness, this is at the upper end of the size limit. You need to be able to know by name everyone in your community to gain the benefits of social responsibility toward each other that I have described here. However, there is a genetic need for a reasonable size and intermingling of different gene pools, so the limit should not be restricted to too small a number. If only this were something we could experiment with and find out what works best!

In the next edition:        How could we improve the current political systems?