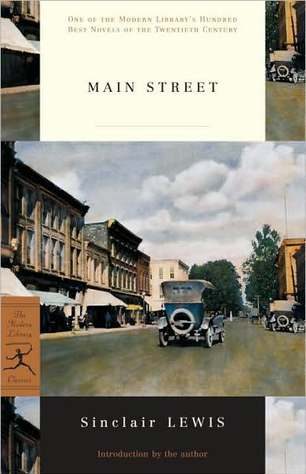 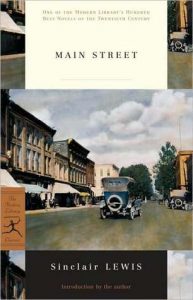 I was attracted to reading Sinclair Lewis’s Main Street when I discovered that Lewis was the first American recipient of the Nobel Prize for Literature, in 1930. This book, published in 1920 to great critical acclaim, was one of the first to really establish an American literature canon that could stand on its own two feet as separate or distinct from European literature. Or so went the lecture in which I first heard of Sinclair Lewis. It’s probably true, but that doesn’t mean it’s a great book!

First off, it’s way too long. For all the action that happens, it could easily have been written in half the word count. I loved the main protagonist, Carrie Kennicott, her brains, desire, and drive to improve the cultural levels in the Minnesotan smalltown of Gopher Prairie. She’s married the town doctor and so is in a good position to make things happen, but feels stultified by the snobbish, gossipy and unhelpful fellow townsfolk.

Having lived in 1980s smalltown Kansas myself, I can utterly see how Main Street illustrates the historical forerunner of all midwestern small towns. It encapsulates, and details, early 20th century American life very well, and this is where most of it’s plaudits came from. However, the story doesn’t go anywhere. I doubt if this is a stroke of genius by Lewis – giving the reader the enduring tedium of 454 pages of day to day details of life in Gopher Prairie as a metaphor for the enduring tedium of 45.4 years of day to day life in Gopher Prairie. I was constantly waiting for something important or exciting to happen to Carrie and Dr Kennicott. As were they, apparently.