A book review of The Disoriented by Amin Maalouf, translated by Frank Wynne.

In short, I loved this book. 5 stars. 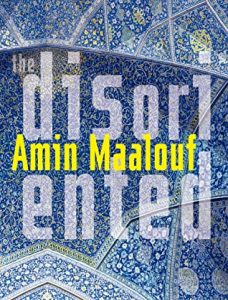 But that struck me as odd the whole way through reading it! The things that I normally enjoy in a book are concepts and ideas, the more high falutin and philosophical, the better. The Disoriented is a tale of human relationships – not my cup of tea really. There’s quite a bit of discussion of ideas, but not only is that not the focus, it’s not what I really took to when reading this story. Indeed, the musings on ideas are all in human relationship contexts. What kept me reading late into the night were he descriptions of people – both their character(istics) and behaviours. These were so well drawn that I was really transported into their lives.

The story revolves around Adam and his group of old friends who have been scattered around the world, mostly lost touch, and all miss the halcyon university days that had seemed to set them up as inseparable friends for life. It is set in an unnamed middle eastern country which descends into civil war, and this, combined with their disparate religious and family backgrounds, serves to propel them apart. Nearly 30 years later, one of their number dies, and Adam returns for the first time to his homeland. This homecoming launches him onto a nostalgic mission to bring them all back together. Something like a Friends Reunion in Beirut (which is my guess at the location, given the author’s bio).

The slow build up of reconnections and the consequent drip feed of life histories makes for a really enjoyable read. Unfortunately I felt quite let down by the ending. Not quite as bad as Bobby Ewing appearing in the shower after being dead throughout a ‘dream’ series of Dallas, but there was no real conclusion. I’ll say no more to avoid any spoilers, and I’ll also pause to reiterate that I give it 5 stars. Well, maybe 4 ½ but that’ll round up to 5!