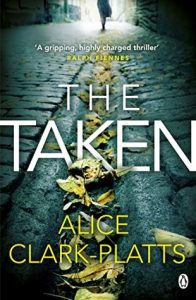 I bought The Taken by Alice Clark-Platts because it’s a murder mystery set in Durham, where I’ve lived for 30 years, and where my own detective novels are set. Naturally as it’s the competition, I wanted to hate this book, but the writing was reasonably compelling.

The actual plot was fairly formulaic, but I can’t claim that I guessed whodunit before the story revealed the murderer. The characters similarly were somewhat formulaic, but well drawn and fairly believable. Although, as one other reviewer has suggested, the antics of the characters make Durham seem more exciting than it probably is. Maybe I just move in the wrong circles!

However, the thing that really lets the book down, and had me shouting at my kindle, is that virtually every geographical reference to places in Durham is wrong! They ‘… turned left out of the police station to walk to the Market Place.’ NO! NO! NO! That would be a ridiculous circuitous route! “Hmm,” I though to myself, the blurb that sold the book to me said that Clark-Platts had been a student in Durham and that had induced the choice of setting location. Maybe, she was here years ago when the police station was on the other side of the building? I looked to the front of the book – published in 2016, so that excuse isn’t gonna fly. The boarding house which is the murder scene is on a street that has no buildings. I don’t mean it has no B&Bs, it has no buildings at all, except the train station. Now, maybe that was a deliberate invention so that no Durham B&B felt impugned as being a crime scene. The fact that only a couple of the location references are actually correct led me more to think of this as an error rather than a fiction.

So, overall, a run of the mill, albeit fairly well written, police procedural, set in an almost entirely fictional Durham City.