As I write, there are out-and-out civil wars in umpteen countries, violent conflicts of other descriptions (violent independence or insurgency movements) in double-umpteen countries, violently oppressive governments in power in umpteen more countries, and simply criminal violent groups in many others. And of course a Venn diagram of these conflict/country lists would have many overlapping sections. It is no longer as simple as ‘are we at war?’ – although I wonder if, in fact, it ever was that simple.

With unprecedented opportunities for communication and transport, the movement of violence around the globe no longer pays any heed to national borders. The Global Peace Index does not even list whether countries are at war or not, it simply grades each country according to the peacefulness its residents might enjoy. Or not. 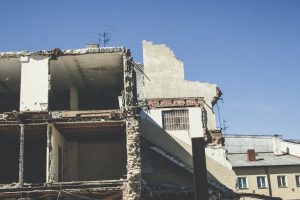 I wonder how sustainable, or unsustainable, this process of seemingly fluid and interminable violence is. What level of infrastructure failure elsewhere would push us over a tipping point whereby the whole house of cards comes tumbling down? How much lack of food distribution will take us into a global meltdown of banditry and internecine fighting which would further destroy the infrastructure so that the situation cannot be reversed back to the current situation? And with that ability for easy movement from country to country, how much conflict is needed before everyone is involved? War, famine, pestilence and death: are the times predicted by Thomas Malthus soon to be realised?

I once asked a botanist about how a tree could be considered dead. As a physicist, I would have expected that if you slow the supply of nutrients and flow of water to a complete halt, the chemical reactions in the tree would slow to a stop, but given no external destructive influences (like a storm during this hibernation) then surely the mechanism could slowly be restarted and continue to function as before. I considered the tree to be no more than a mechanism, and thus could operate at whatever pace the local environment permitted. Imagine a small hydroelectric turbine providing local electricity . If the river were to dry up, the turbine slows to a halt and the electricity stops. Maybe for decades. But once the water returns and flows over the turbine blades again, the machine restarts and electricity comes from the wires again. Apparently a tree is different! There are one-way chemical reactions, which cannot simply stop and be restarted later. A ghost in the mechanism – who’d have thunk it? However, I picture the global food distribution infrastructure in the same way as the tree. When you snip enough of strands, the entire web disintegrates, and cannot be untangled from the dangling threads.

How many people would need to be missing out on food distribution for their hunger-forced looting and banditry to make our global web fail catastrophically? In my novel, 2089, this kind of global apocalypse is the historic background that sets up the society that our hero is working within.

I find it astonishing, to the point of unbelievable, that those living in countries like Syria or Iraq or South Sudan can still eke out any kind of living at all. Where is the food and water coming from? It is exactly this kind of resilience that makes humankind so extraordinary. From the rubble and ashes, people continue with small local trading, rebuild water supplies, again on a small local scale, and grow little bits of food in the little bits of soil. Needs must, and so they do.

If the global, and indeed significant local, infrastructure is destroyed, how many people then live in locations in which they could grow sufficient food to feed their families (ignoring for a moment that they might not have the know how or the seeds)? If the sort of devastation that has been wreaked on Syria were to spread to all territories in the world, how many people would survive the ensuing banditry, looting, disease and hunger? In 2089, I suggest a survival figure of 100 million globally, and they are spread far and wide in very small groups. I can’t envisage the large, dense, urban populations surviving when all food supply is cut off. But the whole notion of an all-encompassing catastrophe of this scale is intriguing to think through. Such considerations are what I’m hoping to stimulate in the minds of the readers of both this blog, and of my new novel. Probably why this edition of the blog is mostly questions and not many answers!

In the next edition: How will climate change add into the changing social order?