A few years ago, I toured a factory in Darlington in the north of England, where they are developing mini projector systems to install in smartphones – lay it on your coffee table and watch a movie on the wall. Doesn’t seem like they’ve managed it yet, but I’ve been wondering what developments might be coming for our portable devices? 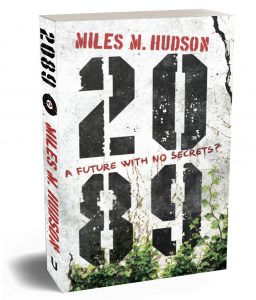 From my love of science fiction, one thing I’ve worked out is that we can actually make anything that we can imagine. It might not be financially viable, but in general terms, the science is not beyond us. As I mentioned near the end of the last post here, when they came up with the idea of the Large Hadron Collider, CERN were well aware that they would have to invent much of the technology to fulfil what the experiments needed. I’m not entirely convinced by my own claim here (thinking time travel and teleporters) but I’m certainly expecting everything I’ve made up in my new novel to actually come about. Indeed, in the five years I spent writing it, the idea of wearable smartphones pretty much rushed ahead of me: think Apple watch and you’ve got a dinky version of the ‘armulet’ in my novel, 2089. 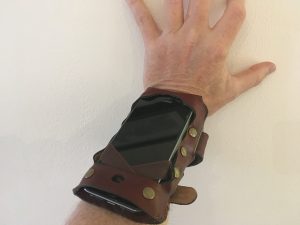 So what is special about the armulet? Well, it displays things in a projection in the air in front of the user, rather like the aim of the factory I toured, although it doesn’t need a screen, so holographic I guess. The real beauty about writing fiction is that I can invent what it does and not have to worry about how it might get it done! OK, what else? It can be controlled by gestures and voice commands, as well as the touch screen, all standard tech now.

About the size of a smartphone of today, the armulet is so named because they’re generally worn on the forearm strapped on a vambrace of sorts. There’s plenty of opportunity there for artisans to tailor-make fancy designs. As you can see here, this is already taking off in various genres – I love the steampunk one!

However, one thing I think is a new idea is that it never needs charging: the movements of your body are converted into electrical energy which it then stores in the battery.

My grandfather used to have a watch that worked like that, but I suspect the clockwork energy requirements are a bit less than an armulet’s needs. Then again, the efficiency of devices is constantly improving, so merely an anticipated future development rather than out and out science fiction. In fact, if you search the internet for ‘kinetic phone charger’ you’ll see that I had to get this novel published before everything I’ve invented is in fact commonplace!