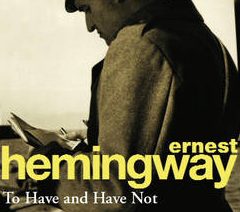 Book review – To Have and Have Not by Ernest Hemingway

As a thirsty and aspiring fiction writer, you’ve got to have a love of Hemingway. A Farewell to Arms was great. So, in a random moment, I picked up To Have and Have Not to see about getting an eye for his famous brevity, and maybe tips for mixing a perfect mojito.

Grizzled sailor Harry Morgan runs rum and illegal aliens between Havana and the Florida Keys in the 1930s. He comes up against all sorts of troubles, from bullets to customs raids to the loss of an arm. His luck is going steadily downhill, and then there’s the big chance, the last chance. Can he run a gang of Cuban bank robbers back from Florida, get paid, and get out alive?  No spoilers, but it all rounds off in a nicely complete way.

However, I was a bit thrown – put off is perhaps more accurate – by a variety of side stories. They were all really interesting and well drawn, but did nothing to advance the actual story. Indeed, the tales of yacht folk were utterly irrelevant. Nice little character studies, but irrelevant. As was the story about the writer, struggling with his marriage and spending time out and about in the town. This almost ran as a parallel, but unconcluded, story. Again, well characterised, but ultimately irrelevant.

And all in Hemingway’s classically terse style. I can well imagine that his editor had to agree to leave in the extra tales of interesting characters who don’t advance the plot, because the already brief 180 pages would probably have been barely half as long if they were cut. An enjoyable read, but really more a novella interspersed with short stories (some very short).