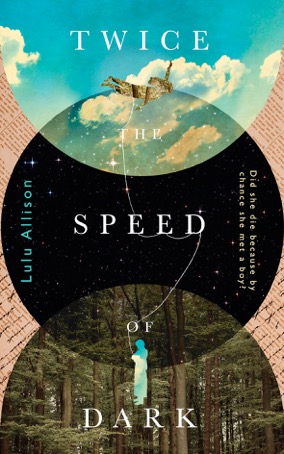 If I only read the blurb for Lulu Allison’s, Twice the Speed of Dark, I almost certainly wouldn’t buy it. I like literary fiction, but stories about families and emotions are just not my thing. However, I’m really glad I read this book. It is beautifully written and compelling: the intensity of a mother’s grief at the death of her daughter is so strongly imparted that one can only marvel at Lulu Allison’s writing talent.
Early on, I got a strange connection to Ohran Pamuk’s ‘The New Life’. The books are not particularly similar, but both contain characters doing seemingly bizarre activities, which overcome their strangeness by being both enthralling and in character. Pamuk has a character who spends months riding Turkish minibus across the country in the hope that they will crash and that experience will enrich his life. Allison’s main character, Anna – a mother grieving the death of her daughter at the hands of an abusive  partner – writes little scene vignettes about unknown dead people. Anyone reported killed on the news is given new life as an imagined character that Anna writes about in a notebook. These elements are a study in people-watching: I wondered if Allison spent hours in coffee shop windows writing these characters from real people-watching. You can read the original project, Shades, that this element of the story was based upon, if you click here

Both imagery and technical wordplay are very strong in this book. Indeed, it included the most brilliant use of the word ‘husbandry’ I have ever come across; and the excellent use of ‘mummify’ also brought a smile to my brain. As many reviewers have said of Twice the Speed of Dark, the prose is genuinely lyrical.
The time we spend with Anna is occasionally interrupted with input from the disembodied spirit of her daughter. Caitlin is stuck in some sort of purgatory, still not understanding or even totally familiar (after ten Earth years) with her non-corporeal situation. Anna’s story takes us through the mundanity of coping, or not, with her ongoing grief,  heightened by the recent prison release of her daughter’s killer, Ryan. We see her struggle with friendships, with the ease of alcohol as support, with the dark hatred she has for Ryan, and with the difficulty of moving on and finding purpose for the future. The final conclusion is interesting, and it’s neither of the two possible endings I was building up to in my mind. No spoilers – read it and find out!

Lulu Allison has a blog which is just as well-written as Twice the Speed of dark.