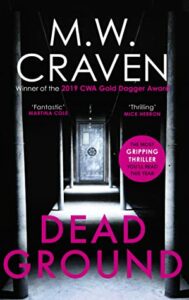 A variety of fairly standard characters dance around an increasingly high level murder investigation in this very readable crime mystery. I enjoyed the book and would recommend it, but it is relatively formulaic.

Craven’s 4th Washington Poe story has the detective pottering around Cumbria. He is simultaneously defending an eviction court case from the croft that he loves, whilst investigating a murder in a Carlilse pop-up brothel. This murder raises a few odd queries, suggesting it is more than it seems. Links to a US presidential visit to a fancy Lake District hotel bring in the Secret Service and MI5, and then the investigation goes down a road linking in historical casualties in Afghanistan.

Brash and unrelenting, Poe seems able to push everybody’s buttons, and uses this to trip them up. It’s easy to like his approach, but I found the rest of the characters very standard.

Some elements of the plot twists did take me by surprise, whilst plenty were eminently foreseeable, which is probably the intended combination, to keep readers thinking that they’re in control but also enjoying some surprises. I’d agree with the cover quote from B.A. Paris that it is ‘entertaining and engaging’ but not with the Daily Express’s suggestion that it is ‘unmissable’.